A good dish is one that stays in our memory for some time. But, an extraordinary dish becomes eternal in our memory.

We all have wonderful memories of certain typical dishes from our childhood. This is the reason why we feel so identified with “Ego”; that particular character in the film titled “Ratatouille”, when he takes the first bite of his dish and is instantly taken back to his child-day memory of him eating a classic ratatouille made by his beloved mother.

Our mom’s dishes will always be in our hearts and palates, but as we grow older we get the opportunity to know an extense variety of dishes from all over the world. And, a perfect example of a city that gathers retaurateurs and chefs from anywhere we can imagine is, of course, London.

And nowadays, what is an almost instant reaction that we have developed when we see something that we would like to share with the world? Post it on social media. The term “instagrammable” couldn’t have been invented in an era other than this one.

That being said and clarified, let’s take a look at some of the trendiest and most instagrammable restaurants in London at the moment:

“Eat well. Eat with purpose.” This is the slogan of one of the most famous and trendiest vegan restaurants at the moment.For some years it has been a fierce dominator in the vegan restaurant community.

With its primary locations in the most important cities of the U.S. like New York, Boston and Los Angeles, it has now finally opened its first location in Europe; in London!It islocated in Covent Garden. And, if that weren’t enough, By Chloe is already announcing the opening of a second location in London, in One Tower Bridge.

This particular Italian cuisine café located is in the Bourough of Hammersmith and Fulham. It has been in London since 1987, and yet to this day has not lost its popularity and recognition. Italso received a Michelin star in 1997. The café is frequently referenced as a must if you are visiting London.

Some of its trendiest signature dishes include the wild mushroom risotto, and some of its acclaimed desserts are the lemon almond cake, and the chocolate “Nemesis” cake. Another aspect that has made this restaurant so outstandingly trendy is the fact that many chefs that are now famous and successful have trained within the River Café’s kitchen.

This famousIndian restaurant is also quite new in London. It opened in November 2017,on 29 Maddox St, and the first thing that catches the eye is its décor; the interior of the restaurant simulates an old Bombay railway carriage.

Some of their most promoted dishes so far are the tandoori fish and peas, chicken and quail egg curry, crispy potatoes, lamb biryani; and for desserts they offer a piña colada flavored dessert, sorbets and kulfi amongst others.

This particular restaurant is found on 36 Snowfields and it offers Portuguese and English cuisine. The owner, Leandro, was born and raised in Losbon, Portugal, and eventually moved to London. “Londrino” is actually the Portuguese word for “Londoner”. That combination of styles and dishes is what part of what makes this restaurant interesting and unique. Also, it includes a welcoming wine bar that needs no reservation.

In its menu you’ll find dishes such as theRegal oyster with samphire vinaigrette, prawns with a mustard sauce, smoked beef, Jerusalem artichoke and whey, and aScottish langoustine.

A Spanish tapas bar which is available at three locations in London; the trendiest and most visited is the Soho’s Dean Street one. The other 2 locations are at Adelaide Street and Drury Lane in Covent Garden.

The restaurant’s fresh and open decoration is extremely welcoming. The style is mimicked in all three Barrafinas; they have an open kitchen where customers have a complete view of their chefs while cooking the succulent Spanish dishes offered in their menu.

This modern Mexican restaurant has an integrated mezcal and tequila bar. You can find it on 152 Tooley St. and have an amazing insight into the Mexican culture and gastronomy. The restaurant owner’s intention is to bring a piece of Mexico to London. It is inspired by the flavors and ingredients that are local and traditional to Mexico, such as Pasilla and Serrano peppers and even grasshoppers.

Santo Remedio gives a proper rendition to Mexican homes, traditions, markets and the famous “taquerías”; small street stands where it is possible to find a variety of tacos, a traditional (and delicious) dish, by highlighting that all these factors influence their mission as a Mexican restaurant in London. 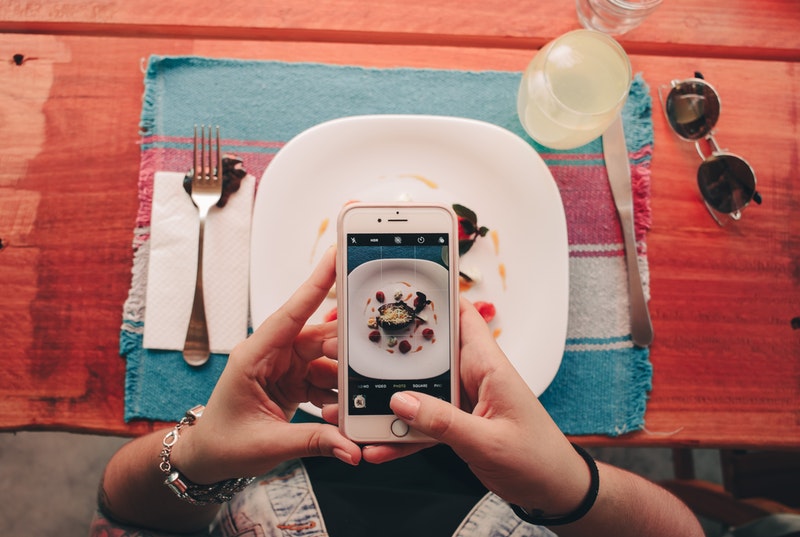 Food has been having an interesting evolution when it comes to trends and creativity. Extravagant combinations suddenly pop up in a fancy restaurant, an ice cream parlor, or even on a street stand.

For example, one day you find yourself drinking a unicorn frappuccino, and the next thing you know, a person at some point of the globe is drinking a good latte… from an avocado.

We all remember the unicorn trend that Starbucks came up with just a few months ago, and next thing we knew, there were unicorn lattes, unicorn donuts, cakes, etc. It takes one good creative idea to flourish to make a local business extremely popular on social media nowadays.

Social media and today’s bloggers are helping with the marketing of so many food businesses. Thanks to selfies and the general frequent use of our smartphone’s camera, today it is more crucial than ever, to have a good-looking dish; even if that could be a simple donut or a hot dog; or beverages like coffee or tea.

People like to share photos of their unique, stylish and “Instagram-worthy” food. So, in this article, we will be analyzing some of the trendiest dishes and beverages from the last few months.

The trendiest food and drinks

A very popular and fancy (and expensive) trend has been taking over the internet: gold.

Edible gold has been the star of many food trends lately. Of course, it owns many attributes to turn a simple dish into something elegant and unique… and quite expensive.

Snowopolis, a famous dessert shop in California, just a few steps away from the Disneyland Resort, has introduced this glamorous treat to its menu since February. How is a 24-karat pure gold ice cream put together?

Well, the first step is making the waffle cone. Once the cone is ready, it is sprayed with edible gold dust. The next step is to fill the delicious cone with a nice vanilla soft serve.

And, the final and most eye-catching step is to actually take some 24-karat gold leaves and put them onto the soft serve. The result? A sparkly, golden, glossy $14.95 24-karat pure gold ice cream.

The tortilla used to make this taco has gold flakes infused to it. The tortilla holds langoustine, Kobe beef, beluga caviar, truffle and is topped with brie cheese. On top of all that they add more gold flakes.

The restaurant is Aliena, and Grant Achatz, the head chef and co-owner of the creative restaurant is the person behind this unexpected dessert. Diners not only receive a delicious Michelin dinner, but they also receive a funny moment after eating this peculiar dessert. With the voice changing effect of the inhalation of helium, the dinner becomes a fun social reunion.

These are just a few examples of what is going on with the food and beverage world. Creativity and letting free our imagination when it comes to the food business is really benefiting local restaurants around the world.

Colors, glitter, shapes, 2 in 1 combinations, personalized dishes and drinks have a good chance of helping a business in reaching their market segment and obtaining popularity and recognition in social media.

We never know what new trending ideas will burst in tomorrow, but we will be ready to embrace them.